The return of the megadeal

The baseball megadeal, presumed a thing of the past since the arrival of the coronavirus, was resurrected Wednesday. As with any proper reanimation, there were double takes, bulging eyes and mouths agape — all the ingredients for a proper derp face. Thirteen years and $392 million has that kind of effect.

Never mind that Mookie Betts and the Los Angeles Dodgers might have been the perfect candidates for a ’til-death-do-us-part contract — him supremely talented, them revenue behemoths, together better than the alternative. There are some realities to which one grows accustomed in the middle of a global pandemic, and one of them is that baseball teams, which claim to be losing money, are not particularly inclined to guarantee upward of $400 million to one man.

And yet here we are, the Dodgers having done that and Betts having eschewed free agency for it. He could have waited 3½ months and tested the market. Instead, he managed to kill two birds with 392 million stones. There was the getting-paid part, sure, but also the fulfillment of something important to him: leveraging his situation into a meaningful result for other players. 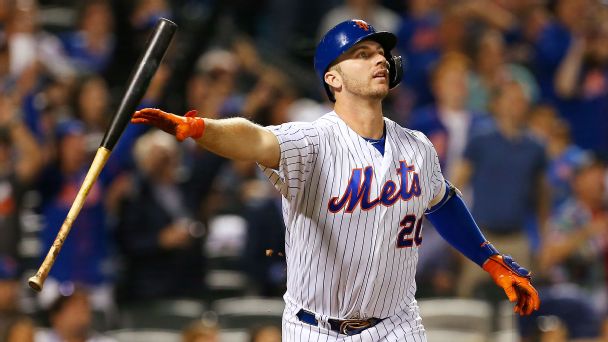 Baseball’s back! You can watch the start of 2020’s 60-game sprint throughout the weekend.

On ESPN and the ESPN App; all times ET.
Don’t have ESPN? Get instant access.

What’s difficult for Boston fans to understand as they see Betts get traded to the Dodgers in February and sign with them six months later is principle — not some dislike of Boston or the Red Sox organization — guided him. Free agency wasn’t alluring simply because of the money. Betts was going to be stupidly rich regardless. No, it’s that free agency, typically, is how players set new standards and give back to future generations. And the Red Sox’s contract-extension offers to Betts didn’t exactly fit that bill.

Wednesday — now that was a standard-bearer. It was Betts saying to Francisco Lindor and Javier Baez and Trevor Story and Kris Bryant and Carlos Correa and Aaron Judge and Cody Bellinger and the handful of other star-caliber players with an eye on nine-figure paydays that however much ownership may cry poor these days, teams still will reward stars.

Trickle-down economics don’t exactly apply to baseball, so it’s not like Betts’ contract will save the game’s rapidly contracting middle class or rescue what still is expected to be a parsimonious winter for teams. What it does is allow George Springer and Marcus Semien to scoff at lowball offers come November. It reminds the all-time Class of 2021-22 — Lindor, Baez, Story, Bryant, Correa, Corey Seager and Nolan Arenado if he opts out of his contract — to not panic.

No team, not even Los Angeles, is going to guarantee the second-most money to a player in the game’s history if it doesn’t believe in the game’s future, in its capacity to recover from the coronavirus and find some semblance of normalcy. The Dodgers aren’t just making a bet on Mookie. They’re betting on baseball as a whole.

Betts, too, had bet on himself, and he’s a template for Judge or Trea Turner (Class of 2022-23), Bellinger or Matt Chapman (Class of 2023-24), Fernando Tatis Jr. or Pete Alonso or Juan Soto or Gleyber Torres (Class of 2024-25) — to the few who don’t settle for a below-market contract extension early in their careers. Those are increasingly rare, and they can reap rewards that feel exponential.

Make your Opening Day picks. Compete for your chance at $1,000! Make Your Picks

What Betts did is what Betts enjoys doing. In arbitration, he set records by pushing boundaries and empowering his agents, Ed Cerulo and Steve Veltman of VC Sports, to fight. The extension took that spirit and dreamed big. Now the Dodgers have one of the game’s five best players fulfilled and locked up through 2032.

This is how a contract negotiation is supposed to end — with fairness and satisfaction. Not every team can weather a $400 million investment in a player, and so it’s not as if the megadeal is some egalitarian principle meant to satisfy all. No. It’s for the players who warrant it like Mookie Betts, for the teams that absolutely can afford to hand it out, for the sport that at least for one day felt normal again.